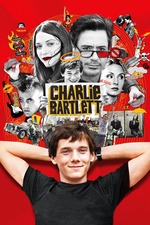 I feel like people at the time were mixing this up with "Charlie Wilson's War", and I feel like these filmmakers were rooting for that if viewers are supposed to root for a high school drug dealer. For those who are a little more sympathetic toward politician war profiteering, rest assured that Anton Yelchin isn't quite going from "Huff" to "Snuff", but Charlie Bartlett is still far from a good role model. Neither was his father, who is nowhere in the picture, but leaves his family plenty of money to bounce 17-year-old Charlie between private schools for each expulsion over his devious wit. Enough is enough for his depressive mother, who condemns Charlie to the hell of public school that he quickly learns the culture of, before digging even deeper. He secretly becomes Western Summit High's resident psychiatrist, going so far as to coerce health concerns from his own line of therapists to score and redistribute prescription drugs. Soon academically and personally overwhelmed by his lucrative business, and smitten with the sadsack principal's lovely daughter, Charlie must find a way to finally be a kid without getting tried as an adult. It's all charming enough for, well, at least some of the less conservative parents to root for Charlie, but he's not the only one going with an identity crisis here.

The whole film is an identity crisis as a teen comedy, which promises to be highbrow with its themes on intellectual maturity, status clash, mental health, a drug operation... and maybe whatever else that R rating entails. All those concepts entail a snarky pretense in overwitted dialogue and radical characterization between the pompously cynical lead whose humbling is not always organic, and crude supporting sheeple whose evolutions are nonexistent. There needs to be some subtlety or lucid progression even in the heavy-handed satire and farce if this is supposed to be a real high school movie for grown-ups, but it feels more like one for Nickelodeon. Jon Poll directs to that with a lot of frilly and bombastic music and editing, novelly aesthetic montages, hammy acting, and bubblegum quirk and sentiment. Even with Gustin Nash's script, the dialogue gets cheesily on-the-nose, the humor a bit wacky, and the storytelling rushed over situational and character logic. It's just not very stable in its aspirations to grown-up character that isn't deep enough; cynical honesty about kids that is just different artificiality; and teeny bopper fluff that simply has no place in the type of movie this should have been. As it is, this is of course edgier than the average high school yarn, but it's also no less colorful.

John Poll's direction is a proper blast of eccentric, airtight hyper-editing, overinflated music and energetic pacing that ride the high momentum to low culture. Gustin Nash's sense of humor is a lot of snarky, punchy patter among colorfully over-the-top character types, with notes of profane edge and intellectual elevation that serve the R rating at the most base level. For all the full world-building through eccentric character types and the wholesome celebration of socially healthy, humbly empathetic coming-of-age, these teen movie hallmarks deserve a mature texture. Nash isn't afraid to break the levity with the tension of the chemical, social and even mortal consequences of anxiety in youth, or even to hint at complicated parental dysfunctions, class conflicts and more sinister failures in authority that factor into kids' burden of self-realization. The rise and fall of the friendly high school therapist and drug dealer is a thrilling tragicomedy anchored by adult themes and the layered characterization they incidentally inspire, even though they're still so underdeveloped. The bigger names in the cast still pack some deep dramatic chops on top of the comic ones, with Anton Yelchin simply epitomizing slick charisma that is tactfully weathered by convincing emotional range. The final product is as smartly well-intended as it is entertaining, a noble effort to resonate beyond age ranges that too often dissatisfies along the range.

Adult-oriented teen comedy is often reduced to its snarky and crass conventions when fluffier sensibilities of cheesily trivial characters, cloying direction and hurried, almost disjointed storytelling cheapen, albeit in colorfully stylish and full-personalitied fashion, some actually maturely textured psychological and establishmentarian coming-of-age themes, without devaluing the compelling arcs and performances that make John Poll's "Charlie Bartlett" as neurotically ill-matured and wittily empathetic as its namesake.