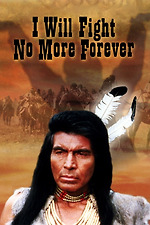 "The Last of the Nez Perces"! Some forever; Ned Romero couldn't make it two years without playing Mohican, though Chief Joseph put up enough fight for any Native American who actually existed. By 1877, his Nez Perce tribe lived in relative stability long the Idaho-Oregon border until President Grant quickly overcorrecting that by opening the territories to white settlers. The usually well-behaved Joseph's stern refusal to relocate soon escalates into all-out war with the arrival of numerous soldiers who are unprepared for their enemy's respectable stand. As the cycle of bloody vengeance rages on, Joseph soon realizes that he has no choice but to bug out, to the usual place for state enemies this up in the United States. Between an epic war for dignity and a flee to join Sitting Bull's cause in Canada, Joseph challenges the white man with such persistence as to excuse the titular redundancy. Like I said, our man is putting up more than enough fight, but the film on the matter isn't so exciting.

This is bound by the technically static and aesthetically strained production values of a '70s TV film, as well as by the format's sensibilities. A solid TV filmmaker of his era, Richard T. Heffron still hits plainly stinging music cues, awkward edits and cold acting performances that leave slower spells with little tone. A captivating story fuels most of the tension, but its telling is simplistic, with dialogue that alternates between static and overdramatic, and characterization that's somehow steeped in both bland stereotype and superficial emotion. This especially goes for the often wooden or victimized Nez Perce characters who break out of their rut with a literal and figurative vengeance, but come to such complex resolutions in revolt, triumph and defeat too concisely. Their motivations and progressions are laid out with interactions amongst themselves or with some variation of morally compromised or scummy white man, with the narration explaining some of the denser plotting. A lot of it does just come back to that dated TV spoon feeding to the lowest common denominator, with limited concern for technique in aesthetic and storytelling. Thrilling as the story is, though, this kind of approach is solidly entertaining.

The production values are sufficiently effective in selling this era and the adventurous climate around it, though with the benefit of a sparse backdrop. The classically western environment is visually stimulating all its own, true to the scale of Chief Joseph's epic adventure against the encroaching forces of the modern world. This sufficiently spices up momentum and keeps the large-scale action from getting repetitive, as they incidentally keep overly brisk storytelling from getting repetitive. I'm well familiar with and particularly interested in the saga of Hinmatóowyalahtq̓it, or Chief Joseph, as a definitive example of the Native American resolve and tragedy in the face of improbable odds. It's too cinematic for TV, but ambition is in spades, namely in moments of heavy dialogues that complicate attitudes toward noble people's refusal to go along with their own displacement and persecution. The staunchly composed Ned Romero and the rousing James Whitmore and Sam Elliott - as two respected soldiers who went on to become Native American sympathizers - particularly bring raw emotion in static writing, while Richard T. Heffron racks it with dramatic visuals and music cues. The filmmakers recognize the significance of this epic, and do it as much justice as they can under this formula.

Flimsy TV means are a given, and TV sensibilities simplify a stellar story with often stilted or blunt writing and direction, whose thematically and emotionally involving highlights around exciting production values and action, some effective acting and an all around thrilling epic make Richard T. Heffron's "I Will Fight No More" a frustratingly under-produced, solidly respectful dramatization of a stand against a great shame in American history.