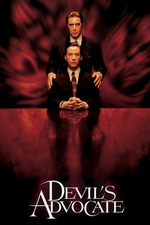 145 glorious minutes of grade a+ primo 90's trash, combining all the bestworst computer graphix with some true elegance, performances as garish as the quietly awful hair and clothes and interior design, an ending as beautifully wild and stupid as anyone could wish for. the best scene is of charlize and pacino at a party - they have a short conversation on the sidelines, she feels very awkward and out of her element, he flirts with her by telling her how nice she'd look with her hair up. pacino's performance here is mesmerizing, he talks to her in a way that instantly makes the rest of the room invisible, intense and intimate, intimidating and warm all at once, never taking his eyes off her face and gently but savagely destroying her defenses, turning her into his prey by briefly making her feel like the most important person in his world while she is feeling her most insignificant. he knows how and why she's vulnerable and goes in for the kill, manipulating her with tenderness that feels impossibly sincere - the most perfect devil i think i've ever seen. to say women don't like nice guys is a mistake - they love nice guys, but it's the assholes, the sociopaths, the demons that learn how to be nice in the most effective way, whenever it suits their own needs. the rest of the movie is predictably hammy, but it is this undertone throughout that makes it impossible to resist or to fully dismiss despite its dorky insanity. not all lawyers are evil, but a lawyer, the dirty-secretly most America career of them all, is the best place for satan to thrive in the modern world.

lol at keanu being named kevin though

The Haunting of Sarah Hardy