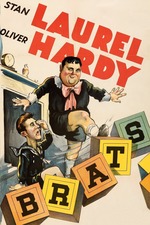 The "uncanny" is a term first coined by Sigmund Freud to describe familiarity in a specific situation, but is presented in a way that generates feelings of discomfort or anxiety towards the audience for which it is subjected to.

Through exploring the concept of the uncanny, Freud suggested the idea of the "double" and is referred to as a degree of development in the early stages of life, yada yada yada. Who cares. However, in films, the biggest portrayal of the double is through the idea of the doppelganger that is often used to expose the threshold between self and perception of the other, i.e the threatening split between individual and subjective reality. Think the relationship between Marion and Norman in Hitchcock's Psycho or the foundational uncanny valley in films like I, Robot or Ex Machina.

The relationship between Stan and Ollie with their two children in this portrayal represents the doppelganger in a way that goes against the audience's expectations by countering an almost Pavlovian response. By exposing the viewer to an environment that encourages themes of the uncanny, Stan and Ollie can then counter those themes in their Laurel-and-Hardy-like way by representing them in a way that is supposed to be funny rather than strange or frightening.

No, but seriously, I really don't know what the Hell was going on. Kind of funny, slightly horrifying. Stan and Ollie were two stressed out gay dads just trying to play checkers, and Stan slapped Ollie's ass a couple times, but while they were both really really small. There's also a scene at the end where Stan and Ollie sing to their children as the house slowly fills with water that oddly parallels that one scene from Titanic where the family accepts their inevitable death as they lay their children to sleep, but I digress.