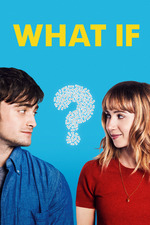 What If is a predictable rom-com that doesn't challenge genre conventions anywhere near as much as the cast and director have sold it does. But the cast are so charming, have so much chemistry and deliver some truly hilarious dialogue that the notion of a predictably cheesy ending doesn't even bother the viewer in the slightest.

Radcliffe and Kazan are adorable, cute, smart, full of heart and warmth and are playing fairly honest and grounded characters. They bounce off each others energy in a wonderful way and they'll fill your voice with dozens of "nawww"s. What's more, their lives away from each other are also worthy - Wallace's family dynamic is a nice touch (The Thing scene made my heart happy) and Chantry's current boyfriend is a good dude, one that even the viewer doesn't want to hurt.

The script is what makes everything work. I'm not surprised it is an adaptation of a play, but I am surprised it was written by the person that wrote Alone in the Dark. The playful dialogue, the frequent film references, the rounded characters and the funny situations provide constant entertainment for the viewer.

If it packed a surprise or two I probably would have happily rated this higher. However it does nothing new, it merely provides its cool script with the right cast and lets them to the work. You do want these great characters to have a happy ending, but deep down inside you wish had more to say on relationships and life decisions. That said, It is great film to watch and will make even the hardest person happy.