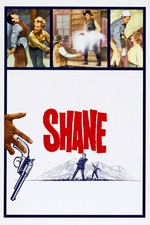 45 years ago I saw Shane for the first time, and it left quite an impression on me. I gather back then I related to the boy. I was seeing this story unfold through his eyes - looking up with awe at this stranger, who comes to town and gives the bullies a black eye. And when he left, I was sad that he kept riding off to God knows where. Why can't you stay, Shane?

Today, while I still enjoy the 'someone stands up for the little guy' aspects, I'm more appreciative of the films philosophical qualities. I like that each side gets to say their piece, that each has a point.

And I was absorbed by these seemingly conflicting ideas: It speaks against frontier justice and shows how terrible violence can be (what happens to Elisha Cook Jr.) And yet like Unforgiven, we see the gunfighter who gave up the gun, eventually relent and become that mythic western figure at the end. The homesteaders - progressive (and scared) as they are - needed a relic to take down another relic to make way for their new, civilized world (which sadly, hasn't proven to be so civilized after all).

I also enjoyed those moments of realism. Fights aren't polished and pretty for example, and a thick dirty mud covers the streets.

Performances? Alan Ladd is all kinds of cool. I liked his calm, easy way of talking. Brandon deWilde doesn't annoy me as he does others - he's a kid. And does a decent job here. Look at the way his eyes alight with hero worship every time Shane's around. Van Heflin is superb. Jean Arthur is okay, if overly melodramatic in spots. Jack Palance doesn't have a lot to do, but he's just so good at being bad. I was also struck by Ben Johnson's performance, because Marlon Brando certainly did a damn fine impression of his vocal delivery and physicality in One Eyed Jacks.

Score could be a bit much (too bombastic, or too sentimental), but sound was interesting – voices echo, and when people speak, at times it sounds like they are speaking from a dream.

So here I am, 45 years later, and happy to report that time has been kind to Shane. It's still a potent and thoughtful elegy for a bygone era.

Four of the Apocalypse