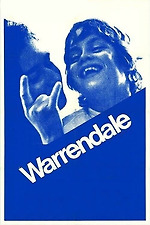 Documentaries are interesting animals - in that I often wonder how much of what I’m watching is truth and how much is manipulation? Apted admitted to such (tricky) deeds in his Up series, and Varda once offered a behind the scenes look at one of her docs, where she shot and re-shot a supposed first time meeting. Staged reality (something Bunuel darkly satirized in his short, Land Without Bread). While this fly on the wall documentary feels about as real as you can get… obviously there’s a camera operator and an editor who have a bearing on what we see and the order in which we see it. The people on screen know they are on screen; their actions and words can’t help but be influenced by the presence of a film crew.

Set at a center for emotionally disturbed children, Warrendale is a draining viewing experience… you never know when a calm or happy moment will suddenly -and without warning- erupt into anger or violence. One kid in particular was a real handful: spitting and fighting and uttering more F-bombs than Sam Jackson in a Tarantino film. Overall I felt a mix of frustration, upset and concern while watching, and it gets real difficult and raw when tragedy strikes midway through.

Call me a cynic but I can’t help but to question how much of this is really cinéma vérité (observational cinema), and how much was done for show, self consciously or not. How much of it was manipulated? Hell, the cook could have died at the beginning of shooting, for example, and it was placed in the middle for its dramatic effect. And at times I swear I could see the wheels spinning in the kids and staffs heads (“Now, what is it I should do, or say here? What’s expected of me?”)

This was my first Allan King film, watched in honor of Canada’s 150th anniversary. I can’t say I enjoyed it (it’s not a fun picture and isn’t meant to be) but it was fascinating and troubling. Even if I couldn't buy into it all as unvarnished realism, as the majority have.