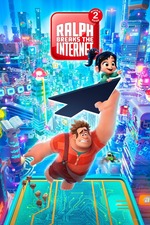 The greatest animated movies are able to juggle the content directed towards kids and adults.  Ralph Breaks The Internet has little there for the adults.  The only thing that stopped me from giving this my highest “failing” rating of a 2.5/5, was all the scenes with the Disney Princesses.  Snow White was great.

Disney is still suffering from their post Zootopia world.  It’s hard to compare Moana and this to that M-word 🤭

Now it’s time to figure out where this goes in my Disney Classics Ranking.

It is a better movie than my bottom 5, that would be

Is it better than some of these WWII era films.  That era  really has a rewatchability problem.  Saludos amigos, Three Cabelleros, I just wouldn’t want to watch those again.  But I don’t think I’d want to watch Ralph 2 again either.  I guess I could see myself watching the princess scenes on YouTube or something.

Fantasia 2000 is interesting because it wouldn’t be unrewatchable if there wasn’t another Fantasia that is twice as good.  Hey, similar to the Ralph movies.  But regardless...

Meet the Robinsons is Ralph’s next matchup, and this is where it loses.  Neither movie is great, but Robinson’s has more to the story, It’s more complicated.  It has that “Classic Disney villain”.  Now, by no means is the villain from Meet the Robinson’s a classic, but I miss the days when Disney would do good vs evil.  WHERE HAVE MY DISNEY VILLAINS BEEN, DISNEY??????