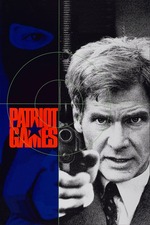 I was 10 when this came out and we owned it on VHS. I was never allowed to watch it - it's rated R and my family was pretty protective - but the glimpses I'd catch passing through the living room as my dad would watch it imprinted Patriot Games in my young mind as the ur-example of what a "grownup movie" was.

Having seen it as an adult, I think the elements I locked onto that made it not for kids are just the relatively naturalistic (styleless?) cinematography and people being mad about politics that even now I only mostly understand.

I'm really tired and don't have much to say about this movie. It's kind of boring, the action choreography is really clunky. It's not great. The accents are AWFUL.

It's wild to me that this was a massive hit but checking box office mojo I guess something had to take up theater space until Batman Returns came out.