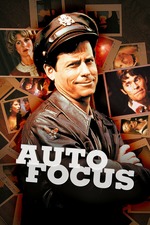 My day ended with a biopic, AUTO FOCUS. Directed by Paul Shrader (best known for AMERICAN GIGOLO) and starring Greg Kinnear and Willem Dafoe, AUTO FOCUS tells the sorry story of Bob Crane, best known as Hogan from sixties sitcom Hogan's Heroes. Crane's story is told because he went from being a loyal family guy in his early years to being a twice-divorced, sex-mad, friendless murder victim in his late 40s.

Kinnear is very good as Crane - Crane's son, who attended the Q&A with Kinnear, Dafoe, and Shrader, told us Kinnear had really nailed his Dad - and Dafoe is at his standard creepy best as Crane's bad-influence-buddy John Carpenter. The writing is good enough to bring about alternately amusing and shocking scenes, and the techincal aspects of bringing us into the sixties and seventies through fashions, decorating, and even faded film stock are totally successful.

Despite that, the story drags (cut 10 minutes!) and is pretty depressing even while being too light. I already felt dirty watching this, but it probably should have been flat-out torturous. I mostly wanted to go because I thought the talent might make for an interesting Q&A (it did improve the overall experience), but I wouldn't have wanted to see this film without that possibility.