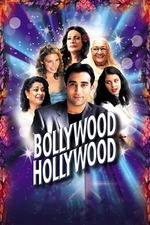 BOLLYWOOD/HOLLYWOOD was the prestigious opening screening of the Perspective Canada programme this year. Written and directed by Deepa Mehta, best know for FIRE, and causing riots in India with the filming of the lesbian-themed WATER, BOLLYWOOD is the story of an Indian family in Toronto and the pressure they put on number one son to stay traditional and marry an Indian girl. It's all a silly romp, and I was glad we were seeing it with a heavily Indian audience who knew much better than my friend or I when certain Bollywood film cliches were being satirized. Heather and I laughed, but an audience brought up on relentlessly fluffy Bollywood films laughed twice as much. It was also an audience that was thrilled to see Toronto highlighted - the helicopter-skyline shot at the beginning got a round of applause!

This film will hit screens in Canada and India in the near future (maybe the US too). If you want a breezy evening exploring North American-Indian culture, go see this in an area that will have the right audience. It'll play much better.