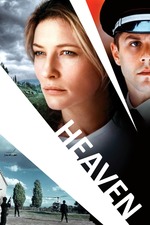 If you haven't been to it, know that the Elgin is a beautiful old theatre from early in the 20th century, restored to its gilded heyday some dozen years ago, and a terrific place to see a film with 1350 other people. The only problem with it is that the film fest doesn't hold Q&A sessions there after the films, so if you're really dying to ask a question of Tom Tykwer, director of RUN LOLA RUN, once the screening of his new film HEAVEN is over, you can't. The Elgin is very very nice, but the Q&A trade-off is one usually I prefer not to make.

Thankfully I didn't have any questions for Tykwer at the end of HEAVEN. He gave a funny and engaging introduction to the film, and the film itself was quite engrossing, but it wasn't innovative like LOLA was, and won't stick with me like LOLA has. HEAVEN, with an original screenplay by Krzysztof Kieslowski who had not quite finished it when he died, is a quite a good flick nonetheless.

Cate Blanchett (didn't show) stars as Phillipa, an English teacher living in Rome who tries to kill a drug dealer who is ruining her students' lives. Phillipa leaves a bomb in the dealer's office, but he escapes while four innocents die. A young policeman, well played by Giovanni Ribisi (also didn't show) is moved by Phillipa's tragic situation. He can also see that she is being railroaded by a corrupt police captain who is in the pay of the dealer, so he decides to help her escape.

Loaded with moral ambiguity, a plot with some interesting twists, stylish and beautiful filming and strong performances, HEAVEN is a solid contender for your entertainment dollar upon its release.