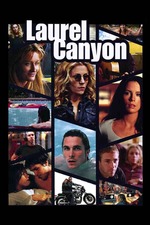 LAUREL CANYON ended off my evening. This film stars Frances McDormand (showed), Kate Beckinsale (didn't), Christian Bale (didn't), and Alessandro Nivola (showed - should I know who this guy is? There was a ripple though the audience when he was introduced.). Willem Dafoe (also showed) is not in the movie, and he's shorter than I expected.

McDormand plays a libertine music producer living in LA. Bale, her son, is a conservative, recently Harvard graduated psychiatrist who has returned to LA with Beckinsale, his studious and equally uptight fiancee. Nivola plays the singer whose group is recording an album at McDormand's home studio when Bale & Beckinsale arrive.

Intelligently written, this film lets its characters unravel and find their cores as their differing personalities collide. It's fun, it's light, it's smart. Go have a good night at the movies when LAUREL CANYON hits the screens.