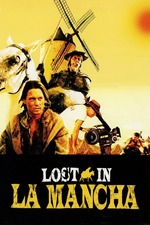 Another day, another doc. This one, LOST IN LA MANCHA, tells the story of Terry Gilliam's ill-fated attempt in 2000 to film Don Quixote. Now Gilliam is one of my favourite directors (he gave the world BRAZIL) so a film that details the disasters that lead up to the scrapping of a Gilliam flick was something that I couldn't pass up.

The doc itself is not particularly innovative, nor noteworthy for its direction, but it works pretty well. We get a good look at the various elements that have to come together to make a film, and then we watch as one by one, enough calamities pile up to bring the filming of Quixote to an end.

Just some of the problems? Well, too small a budget to start with, an unbelievable rainstorm that transforms a desert and washes away some equipment, and a lead actor in so much pain he can't walk.

Gilliam and his team look pretty good throughout, they're just swamped by problems beyond anyone's ability to control. One problem with the documentary is also beyond human control, and that was that the climax hits early with the biblical deluge on the third day of shooting, and after that everything's just a long slide into oblivion from there. Despite that, it's all very watchable, with some nicely done Gilliam-style graphics to animate the piece, and rueful laughs throughout.

Gilliam himself showed up for the first screening my sources tell me, doing the loser sign on his forehead as he walked down the aisle. He didn't make it to my screening, but the documentary directors were there to assure us that Gilliam is still trying to find the money to make Don Quixote. Will this candid documentary of a fiasco help? I'm hoping it will.