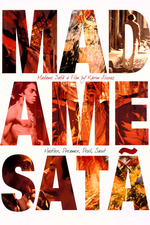 MADAME SATA is my only South American flick at the fest this year. Filmed in rundown bits of Rio de Janiero that easily pass for 1932 when the film is set, it's based on the true story of an infamous Rio drag artist who lived his life outside the mainstream and was punished again and again for it. Joao Francisco dos Santos was a study in contrasts; poor, gay, and black, he was a rough and tough fighter with a short fuse who really just wanted to entertain people with fancy costume and a falsetto. While he loved men he had girlfriends he treated like wives and over time adopted seven children. He did whatever he wanted and sometimes paid for it, with several trips to prison, once for murder. He died a legend in his community in 1976.

In his feature film directorial debut, Karim Ainouz delivers an accomplished piece of filmmaking that vividly portrays the raw atmosphere of Rio's bohemian Lapa quarter, and the intensity of the conflicts and relationships of the main characters in wild but disciplined story. Beautifully filmed and edited with an expertise that won't develop in most director's lifetimes, this guy's got the potential to be great name.

The Man Without a Past