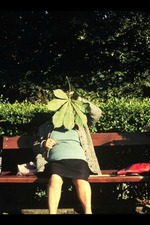 If some day, however, you'd prefer to be depressed by a couple of downtrodden schmucks, then playwright/actor Daniel MacIvor's feature film directorial debut PAST PERFECT may be for you. Oh sure it's got a few good quips in it, (his plays are normally loaded with smart and funny dialogue), but the couple that he and fellow Canuck actor Rebecca Jenkins play are a real drag to be with once they get to know each other.

PAST PERFECT (which really should have been called PRESENT TENSE) cuts back and forth between the couple's meeting two years ago on a plane, and a day now where they have become sullen and act cruelly towards each other. It's only late in the film when we discover what event has led to their torment, one which just doesn't seem to warrant the degree of despair the two are experiencing.

I think I feel as sympathetically towards a film character as anybody when they deserve it, but these two characters, with no clues in the film as to why they are so abnormally emotionally crippled, only merit my derision. I'm only warning you because this film will be released in Canada: PAST PERFECT is time you can spend in better ways.