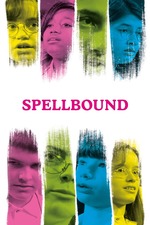 SPELLBOUND was today's second documentary, and one that, based on its enthusiastic write-up in the programme guide, more of my friends wanted to see than any other single film in the festival this year. SPELLBOUND tells the dramatic story of 8 kids who enter local spelling bees in the US, hoping to go to the national championships in Washington.

None of us were disappointed. This is one funny and gripping film: the viewer really gets involved with these oddball smart kids as they deal with the pressures placed on them by their parents, by themselves, and by the attention of the media. Sensitively filmed and brilliantly edited, this doc really has you caring for the kids. Unlike every sports-team film you've ever seen, you don't know which one, if any of kids we are following, is going to be the one out of 249 contestants to win the bee, and the tension as the kids spell multisyllabic words they've never run into before is thick.

So well done, this thing should open theatrically (no distribution deal yet), and should garner an Academy Award nomination. Everyone loved this uplifting flick.