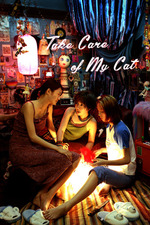 Take Care of My Cat

My low key start this year was with a South Korean film named TAKE CARE OF MY CAT. It's the story of five girls who have just graduated from high school and how their lives change as they decide what to do with their lives.

There's the pretty girl who figures that her good looks and personality are all she needs to get by at a brokerage firm. Three quarters of the way through the film she learns she's considered a "value deficit" at the firm. Darn right.

There's the identical twins, who in their identical twin way would creep us out slightly if they were really delved into, so the director never digs below their similar surfaces and just uses them for comic relief. They decide to make knick-knacks together and sell them out of a suitcase. These two are always happy, I suppose because they have each other.

There's the plain Jane who volunteers her time, whether to a cerebral palsy stricken poet who needs her to type for him, or to the business that her parents run. She's also the linchpin that keeps the group together, but no-one, it seems, does anything for her.

Finally there's the orphan who lives with her poor grandparents in the tumble-down shack that's going to give way at any moment. She has long felt unwanted by the world and now increasingly feels that way by her school friends too, who are all starting to grow apart.

Cell phones play a central role in CAT. Initially they keep the giddy high schoolers together, but answered calls become increasingly scarce as the story progresses. The phones are ubiquitous to the degree that their ringing will be remembered by CAT audiences long after the incidental music has faded from memory. Onscreen text messages from friend to friend, and plain Jane's typed poetry are also presented within the film's frame, artfully blending into the landscapes, architecture, or interior scenes. The technological presence gives the film a right-now feel to it.

In the end, CAT was quite an enjoyable foray into what film festivals deliver best: foreign cultures that we would be unlikely to glimpse otherwise. Outside of Asia or Korean video stores, you won't see this film anywhere else.