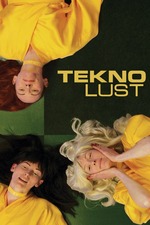 Then it was off to see one of my favourite actresses, indie diva Tilda Swinton, in a quadruple role as a scientist and her clones in TEKNOLUST, a second feature by University of California at Davis electronic arts professor Lynn Hershman Leeson. Leeson is also a "new media" artist and short film director who has won a bunch of awards you've never heard of. After seeing this film I'm convinced that those awards have all come from juries made up of deaf ward patients at the CNIB. I apologize for that, but there's gotta be some explanation.

Our audience tonight might have given her an award. The majority at the screening seemed to enjoy the film, quite a bit in fact. I tell myself it was because before the film rolled the director told the audience that the film is funny, in case we weren't sure, or maybe because Tilda Swinton has a cult following that are just so happy to see her on screen it doesn't matter what else is happening, but mostly I'm scared that the theatre was chock full of the truly clueless. I didn't realize so many are so lost.

Should I be asking myself if maybe I just didn't get it? Ummm, nope, I got it, and it was crap. And I'm not totally alone in my assesment. I take comfort in the fact that my friend Scott who also saw it also sat stone-faced through most of it.

Well, I'm always leary when a director introduces the film with a suggestion to the audience that they can laugh if they think something might be funny. I don't need the encouragement personally. Something funny, I laugh. Isn't that the same for everyone? Why does anyone need that encouragement? Has TEKNOLUST screened to an uneasy silence before? The odd suggestion felt more like a threat. Laugh!

Subsequently as the film rolled, there were certain people that laughed at everything: every line uttered, every movement on screen, would elict this odd, unconvincing and forced a-ha, a-ha, a-ha-ha. It sent chills up my spine as these maniacal sounds suggested that the in-bred were holding a convention and that I might be let out from the theatre into the back alley with them afterwards.

Then there was the material: Swinton plays DNA research scientist Rosetta Stone. She's been a little overly efficent with her work and not only produced a paper on cloning, but three fully-grown clones of herself as well. All on her own. It could happen, right? The girls live in a secret, ultramodern, underground lair in Stone's midtown San Fran house, have data ports in their fingernails, and need daily injections of sperm to survive (by syringe, please). Apparently they're a bit "short on male chromozones".

The sperm is collected by Ruby, the red-attired clone. She mates with men: so that emotional attachments don't develop, only three times before she's off to find another willing donor. Olive (likes green) and Marine (dresses in blue) wait at home for their share, but dream about running around in the real world too. Too bad they start sneezing as soon as they leave the nest, poor immune systems and all. (Damn all those fatal flaws with clones!)

Inexpliquably the girls also have, we are told, "the biggest portal on the net". While guys visit them there, we're not really sure what they do at the "portal", but heck, it's the biggest. So why doesn't a single trick in the film recognize these famous net babes? And does Leeson think we'll be more impressed because the girls' website is "the biggest"? Claims like that only serve to highlight her lack of understanding of the internet.

And the men, the men are all as dumb as posts. A dozen of Ruby's tricks show up pretty much concurrently at one particular Doctor's office with a rash and barcode on their forehead and it takes them forever to realize that the cause of the odd rashes is that they've all had sex with the same woman. The doctor figures the cause of the barcode rashes is that the men have not just contracted a virus, they've contracted a COMPUTER VIRUS. One that can obviously "jump from screen to screen!" The future is here! The future is here!

In the Q&A, Leeson was asked if they had any scientific advisors on the film. Lesson said "Yes, lots! They all quit!" No kidding they quit! Too bad B-movie director Ed Wood was no longer available for scientific consultations: he could have sorted things out, he would have enjoyed the screen credit for this dreck.

Tilda Swinton, an otherwise excellent actress, is stuck here playing the three automatons and an idealistic and completely earnest scientist. The clones, devoid of emotion, aren't a stretch to play, and Stone, the completely earnest scientist isn't close to being believable. Humans are emotional and have motive behind their actions. Swinton's not allowed to dig for those things here, and I blame Leeson for her lifeless performance.

Another thing: remember crosseyed Karen Black from the AIRPORT films? She shows up here to play a transvestite detective who works while dressed as Karen Black. ? ?? Why is that a good idea? It certainly highlights the total amount of stupidity in the film, in case the viewer hadn't clued in to just how much of that there is.

I could go on, but in the end TEKNOLUST must be the dumbest look at the ethics of emerging biotechnologies ever slapped together. Leeson's film doesn't ask us to think, it wants us to think her way: DNA research will turn us into automatons. Here's my thought: this woman is a pseudo-intellectual of the first order who will feed you all the garbage you care to swallow. I done had my fill.