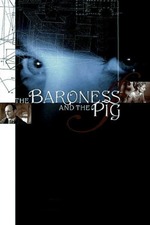 Every year there is some film that rubs me the wrong way, far enough the wrong way that I walk before the credits roll. This year the honour goes to THE BARONESS AND THE PIG, a really ineptly made Canadian flick that crossed my stupidity threshold about 1 hour and 15 minutes in. With only 20 minutes to go, I decided I'd rather be outside filling my lungs with smog. Why? Well, I think it went like this...

THE BARONESS AND THE PIG is the late 19th century story of a rich American woman (Patricia Clarkson) who has married an English baron (Colm Feore) and moved to a Parisian chateau. In an age full of new ideas and inventions, the Baroness is determined to hold a salon where she'll introduce to society an enfant sauvage she has rescued from a pigsty.

That's the central bit. Side stories include the bitchy and decadent Countess who shows the Baroness a thing or two about Parisian society, and the pig himself, the contemptuous Baron whose only concern with his wife is for her money. With two villains happily established, one would hope to have have someone to root for. Our sympathies, however, have nowhere to land.

The saintly Baroness, who has the money to embrace the latest inventions and styles (there are some lovely Charles Rennie Mackintosh furnishings in the chateau, best thing in the flick) and who espouses the radical and progressive ideas that were so revolutionizing the time, is obviously an endlessly curious and intelligent woman, and should be a smart one too. She is, however, entirely blind to her surroundings and naive to a ridiculous degree. I understand that the director may want to portray her as an idealist and singular of purpose but he has made the Baroness both too bright a light and dim a bulb all at the same time to either be believable or sympathetic at all.

The enfant sauvage, a bastard child who was raised in a pigsty until the Baroness brings her to the chateau and tries to civilize her, is also a role that demands some subtlety in its handling, but we get none of that. When we first meet her she is grunting, kicking, and biting. In her next scene a day or two later she's had a maid's uniform pulled on, dusts and washes dishes when asked, and parrots everything anyone says to her and is learning to speak well. Surely common sense, let alone enough MIRACLE WORKER/NELL/MY FAIR LADY/GREYSTOKE type flicks out there would be enough to establish that the speed with which this transformation is portrayed defies any credibility.

Those films also point to this mistake: the enfant sauvage should have been the central role. It would be far more interesting to see a girl thrust into a new world of competing ideas who is trying to find her place in it, if she wants one at all. Too bad we were stuck with a parade of ninnies. After one painfully stupid scene too many, I walked.

It's worth mentioning that no-one else walked out. People were laughing at some jokes. Maybe I just didn't get it. Maybe the theatre was full of undemanding, opiated masses. I dunno. Film sauvage.