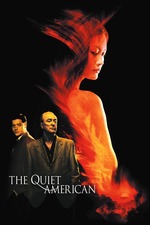 THE QUIET AMERICAN is a new film by director Phillip Noyce (DEAD CLAM, PATRIOT GAMES, CLEAR AND PRESENT DANGER, etc.) based on the novel by Graham Greene. It tells the story of Thomas Fowler (Michael Caine), a British news correspondent living in Saigon in 1952, and his relationship to his Vietnamese lover (Hai Yen Do), and with a newly arrived American doctor named Alden Pyle (Brendan Fraser).

In a time when the French colonial masters are fighting an insurgent and growing communist army and an emerging and mysterious third force, nothing in Viet Nam is as it at first seems. Just when Fowler is is recalled to London by his paper, he finds that things in Saigon are dramatically changing, especially as Americans make their new presence felt.

Beautifully shot in an exotic location with atmosphere just oozing off the screen, and with a well acted, intriguing story, THE QUIET AMERICAN would have been a good time even if Michael Caine hadn't shown up to take questions along with the director and producers. Prior to the screening as I was filling up my bottle at the water fountain, Caine was standing a few feet away with festival director Piers Handling and director Noyce. Noyce was introducing Caine to Robert Schenkkan, one of the co-writers of the screenplay, whom he hadn't yet met. That slightly amused me. Had to happen eventually, right? A couple minutes later Caine entered the auditorium to a standing ovation. Fun night.