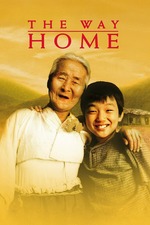 This Korean film tells the tale of a young boy from Seoul whose down-on-her-luck single mother has left him with his back-country grandmother while mom looks for a job to replace the one she has lost.

Grandma's place is nothing like the modern city Sang-woo comes from. There's no running anything, and this kid, whose every desire has been catered to up until this point, finds that turning on the waterworks will no longer get him whatever he wants.

Grandma is poor, stooped, and mute, and maybe you can fill in the rest of this cliche, caring, dignified, and noble. I say cliche because there are also any number of films about people returning to simpler times to find out what's really important about life: THE WAY HOME is a terrific addition to that list. This is the flip side of the enfant sauvage story, where the spoiled city kid eventually learns that all the trappings of civilization mean nothing without love and respect for other people.

Without relying on endless shots of nothing happening, and no saccharine sweetness, THE WAY HOME is a quiet, simple, and engaging film with real depth. The grandmother is played by a 76 year old woman who had never even seen a movie before. She's astonishing. Everyone else is fine, I have no complaints about any of them, but the whole film hangs on this woman's performance, and she's wonderful. This is one of those parts where you can't believe this person is anything other than what you're seeing on screen.

Despite being from a country and a language that normally gets no time on North American screens, THE WAY HOME deserves to play here. If it's marketed well, it just might find an audience. I hope so.