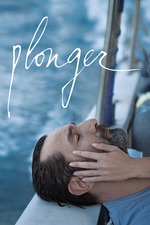 A requin(shark) for a dream

Plonger, directed by Melanie Laurent, sends you into the lives of two lovers, Paz and Cesar, whose passionate love keeps you breathless and a tiny bit jealous until differences sets the two apart. The story builds the characters through raw passion. Seeing them interact in every sense of the word “affection”, ultimately birthing a family. Although, not all is well in dreamville, Paz, longs for more and wishes to travel once more as her youthful passion reignites, but Cesar refuses out of fear of her leaving his life. So caged by love and responsibility, her works as a photographer is crutched and reflected by her works of art where her once free, colourful and energetic pictures now become dull, drab and restricted. The branch breaks, and Paz departs momentarily to rekindle her passion. Or so it seems. As the movie progresses the director’s play on perspective drives the viewer through sympathy and understanding for Paz to confusion and worry, all the while making Cesar the antagonist and the source of misery to Paz, but is it really? The unravelling of Paz’s death and thus the change of perspective to Cesar leaves us feeling what he feels, abandonment and emptiness, searching for answers allowing us to sympathize with his character. The grief from sacrifice and the grief from loss is met with closure as Cesar retraces the final days of his departed love.

The cinematography was well done, scenic shots of the coasts of Gibraltar to the Yemenis seashore helps shape the characters and their wanderlust. The close-up shots make for intimate scenes with a strong play on warm red and cool blue tints.

The languages used in the movie was well placed. As Pez spoke in Spanish, it returns her into youthfulness and freedom, but when she speaks French with her lover Cesar, its full of wander, emptiness, and love.