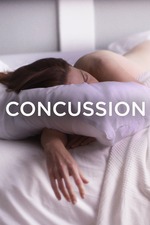 The normative roles we make for ourselves in society are sometimes too constricting, and in Concussion Abby (Robin Weigert, who is fantastic here) reaches a breaking point and decides she must inject something into her life. The bored housewife becomes sex worker is a story that has been told in cinema before (most notably Belle de Jour), but what separates Concussion from most films of this type is that Abby is in a lesbian relationship which is in stark contrast to the way this type of film normally plays out. The way queer rights has been so steadfast in making marriage equality the number one priority in the realm of activism speaks to the idea that queer people can be bored in a marriage just like everyone else. What makes Concussion an interesting film is the way I think Abby eventually feels the restrictive nature of marriage, kids and the house wife gender role and rebels against it to a point where she's having sex with other women for money. I'm not sure if Concussion makes the metaphor of normative lifestyles as prison strong enough, but I certainly think it is there in the way she frames Abby in her own home (surrounded by dull white walls, and piles of laundry). She goes through mental anguish of hearing people around her discuss the most banal boring stories of fixing their houses and talking about their kids, and it's like she's standing around these robotic passionless people (including her wife) and ultimately that leads her to sex work.

It's really interesting how Passon takes the title of the film and goes about creating something murky and dazed in the tone of the imagery and the way the film moves from scene to scene. At times it almost feels surrealist and other times nauseous. The clinical framing of having furniture in all the right places and the blinding whiteness of everything moves to create a tone of a constant dull throbbing, and even when Abby escapes into sex work the whiteness doesn't evaporate for a life full of colour. It's still there and never really goes away. I'm unsure if this points towards Abby subconsciously knowing she would one day return to her wife and all her friends boring conversations at the gym or if these are side effects of the concussion she experiences at the beginning of the film still being present.

The one big fault of the film is how little we actually learn about Abby's family and it reduces some of the emotional heft of the film's later moments to a point where the ending just sort of fizzles out. In one scene near the beginning Abby is discussing a dream she had once about her child and mentioned how she didn't understand if she wanted to kill, fuck, or eat her offspring and it points towards something far more interesting about her family life that sadly is only grazed over. I wouldn't have much of a problem with how dull the rest of her family is in Concussion as a means of displaying how she truly felt about them in this time of her life if Passon hadn't had this earlier scene that hinted at something better than what the family ultimately ended up getting here. It doesn't wreck the film but it certainly holds it back from being great.