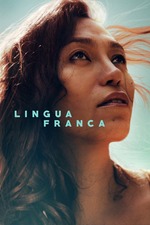 In Isabel Sandoval’s newest film Lingua Franca, a Filipina trans woman named Olivia (Sandoval), is in search of the stability of a green card. Olivia is ensnared in the red tape of documentation that is all the more fraught when considering the trans status of the character. Her passport lists her as male, with an old name, and collides in direct contrast with her body. She is post-operative, and Sandoval makes sure to include a scene of dilation to state that Olivia is a trans woman who has been out a long time. It isn’t rare for trans people to let things like passports and government identification to rot with misinformation, because to gain the acceptance of the government is often a migraine inducing nightmare of bureaucratic tag that begins to feel like a labyrinth with no end. Olivia is rendered with these sorts of specific touchstones that are familiar to any trans person who has been out for any amount of time, but it is the way in which she tells her story that feels relatively new.

Sandoval makes the necessary and smart decision to suggest violence instead of dousing her film with the hard truths of the oppressed. She gestures towards the transphobia her character may face, and the hanging thread of deportation is applied through exhausting sound bites on television of ICE raids and Donald Trump’s hate-mongering. Olivia has heard all this shit before, but it’s impossible to not let it pile up, and Sandoval chooses to shoot her character with a healthy amount of close-ups that trace the lines of her weary, tired face. Sandoval understands this completely, because Lingua Franca is a personal film where a lot of her form is expressed through the way she carries herself as the lead actress. She’s beautiful, but in a ragged sort of way that can only come from battles fought. Cisgender people have no idea how exhausting it is to continually fight for your own identification of self. It is so debilitating that some conflicts are left alone to antagonize later, like her out of date passport.

If the description above makes Lingua Franca sound like an issues film, that’s because it is, but Sandoval’s filmic grammar is influenced by some of the best to ever pick up a camera. On twitter she stated that her biggest influences when making her picture were Ali: Fear Eats the Soul (1974), News From Home (1977), In the Mood for Love (2001) and Two Lovers (2008). The influence of all of those films can be seen in the way Sandoval crafts images. She even opens her film with an homage to Akerman with an image of a subway blistering across a path, while Olivia speaks to her mother in voice over. There are also numerous scenes where she opts for stillness as Olivia goes about her daily work as a care-taker to Olga (the late Lynn Cohen). It is when Olga’s troubled grand-son Alex (a great Eamon Farren) becomes romantically entangled with Olivia, that the film loosens itself from homage and become something brand new.

Alex is a recovering alcoholic who has just gone to work in a meat-packing plant who treat him with a “one-strike and you’re out” mentality. Behind Alex’s eyes there’s a self-destructive streak, and more than a little dose of self-hatred and frustration at his lot in life, but he’s genuinely trying to put the pieces back together and make something of himself. In some ways he sees Olivia as his chance for redemption, but there’s more than a little lust between the two. Sandoval uses a lot of dissolves when Olivia and Alex are around one another and even includes a long, uninterrupted take of the two dancing to a rendition of “Smoke Gets In Your Eye”, which doesn’t feel hackneyed, because this has never been done before on-screen with a cisgender man and a trans woman. There’s a sexual explosiveness between the two and a lovely fantasy sequence of Olivia masturbating to the thought of Alex wrapping his arms around her, and during all this the camera glides gently across her bod, while soaking in her beauty. The specificity of Olivia’s transness makes this scene quite extraordinary, but not in the way that representation is sometimes treated as a participation trophy; rather, this is a sexual moment filmed with care and grace.

When the two eventually have sex it’s nearly as great as her conjured fantasy with Alex taking his time with her body, before he gives her oral. Olivia is largely motionless during this scene, and there’s this unconscious little worry of “what if he finds out?” that’s visible on her face, but it fades. It’s absorbing and wonderful to watch herself go little by little until she is moaning with pleasure. It is rare when transgender people get to experience this much momentary joy in a film that isn’t pornography. The romance between Alex and Olivia is easy to fall for in that way two damaged souls find one another in the wreckage. But there isn’t a happily ever after to be had for these two. Alex lies about important things and withholds in a way that fundamentally offends the trust of Olivia in a later moment of conflict. His whiteness and his misunderstanding of Olivia’s central worries of deportation ultimately get in the way, and Olivia is too hardened to wait and see if she can forgive. She has much more to lose than Alex and she just can’t take the risk of momentary pleasure over warning signs and bad decisions made by someone who isn’t ready to be a saviour. Sandoval doesn’t villainize Alex when he makes mistakes, but asks viewers to understand why Olivia would find certain things unforgivable. This isn’t a film where lives are crushed, they are disappointed in the face of hope, which is a far more complicated emotion to sit with than the plain, blunt misery.

Sandoval’s work is classic, but exciting due to the specificity that comes with having a trans person behind the camera and in front. Sandoval finds new images, new routes for story-telling, because she leans into identification as form. Sandoval understands that everything is at stake for Olivia, as it is with most trans people, and living with that knowledge is an undue burden that will always find its way into the form of stories about us. Lingua Franca is not a call to action, but a small story of one person and their struggles, and because of that, it feels all the bigger for it. This is a film of empathy that is specific to Olivia’s experiences with immigration trauma, transness and her place in the world as a Filipina, all of which are brought to life with a form that is in conversation with these themes, instead of the routine expectation of directors merely cheering them on.

Originally published on my patreon
www.patreon.com/posts/41078020