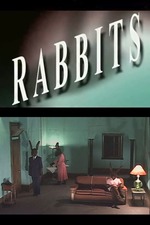 That’s seemingly a throwaway line of dialogue in David Lynch’s web-series, Rabbits, but it chills to the core in its vagueness. Something is coming, but we don’t know what that will be or how it will make itself known. The only information we know to be true is that a presence will appear, and it will be there soon.

David Lynch’s work as a horror surrealist comes to its most mature state in this web-series that follows the lives of three humanoid rabbits who live with one another in a lime green room. Lynch never once wavers from a singular wide shot of the living area so we cannot see or understand the world surrounding these characters. To the left is a door, and footsteps can repeatedly be heard, but often this is merely a red herring, a way to lull viewers into thinking the footsteps aren’t a danger, but the door remains horrifying, because we cannot achieve with clarity that the outside world is safe. Additionally, there is a hallway behind the living room area where the female rabbit (Naomi Watts) can be seen entering and returning before an alluring hypnotic crimson light overtakes all visibility in the living room, and a demonic voiced creature makes itself known. This, however, is not the “It” that is coming. This may merely be a smokescreen for what happens later. Lynch never once moves the camera, and it’s because of this that the passage of time can be felt with such intensity that it only amplifies the horror of the unknown that lies within this haunted living room. It’s a Chantal Akerman technique, where if the camera is placed in a static shot and we are left waiting, we have to pay attention to closer details, which breeds deeper introspection into what is actually happening in the frame. The film begs for a cut, something to take us to a safer place, but that never arrives.

In horror films there is typically a safe zone or safe area where viewers can rest before tension rises again. This is used very frequently in modern horror films as a rhythmic technique to space out various jump scares, because if the entire film is a jolt then nothing separates the action, which would force the horror to be constant and thus less effective. However, in the case of a film like Rabbits the safe-zone of horror is corrupted due to the rhythmic eccentricities of Lynch’s lack of camerawork and the insertion of a laugh track. The laugh track pads the space, but it arrives in these jarring, angular, punch-lines that step on the dialogue. Lynch describes Rabbits as a sitcom, perhaps because it’s shot like one that doesn’t have the tools of a two camera system or an editor. Instead of cutting or taking us to another story we’re forced to sit with this one as characters repeat ominous, scattered phrases like “Something’s Wrong” or “Blood smothered mirror” which convey very specific mental images of terror and the vulnerability that comes with falling under the hand of violence.

It is in Lynch’s rigorous destruction of anything that resembles editing that gives this series its surrealistic terror. If there is not an edit then you cannot escape whatever it is that’s going to happen. It is a foregone conclusion that something is coming and it is to be feared. All three Rabbit characters turn their heads to the door every time footsteps can be heard, which in turn makes viewers look , and we wait and wait, sometimes without anything happening. Lynch only breaks up these tense sequences with the laugh-track as punctuation, which doesn’t let the viewer breathe in a typical manner. It is terror and architecture as mathematics: an equation for horror. The anticipation that comes in waiting for forty minutes without a break in action, waiting on the unknown to make itself known frazzles and strips at the subconscious. There is a total envelopment of the senses in Lynch’s constant rain, the humming sound of nothing in every house, and the occasional sound of someone outside. That we don’t know who is outside is what stuns. In Rabbits you are not safe, and when that door finally opens you are not prepared for what lies ahead. It is coming. Whether you like it or not.

The Men Who Tread on the Tiger's Tail