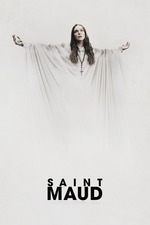 "The modern horror film is likely too infatuated with psychological realism to appeal to me entirely. The lingering scar-tissue of traumatic events has always part of the genre, but the modern horror film oftentimes dwells in the aftermath of inciting events instead of the moment of rupture in the psyche. This is the case for Rose Glass’s debut feature Saint Maud, which follows at-home caregiver Maud (Morfydd Clark) in the wake of a death that may or may not have been caused by her while she was working as a nurse prior. She has created a faith in God in order to cope with what she has witnessed, touched and in some part felt responsibility towards, and her beliefs are rooted in self-inflected harm upon her body. The crucifixion and the art of William Blake, which is directly referenced, are the driving factors for how Maude conceives of her religious idealism. She has rendered a stigmata upon her hands that she picks at and has built a shrine to the aspects of her religion that are built upon images of pain as an expression of devotion, love and endurance, because it is pain that she understands, and pain that gives her control."

My Name Is Oona