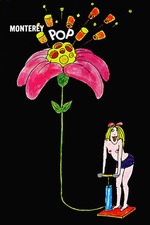 It is a sculpture of time, a specific time in history, that fascinates and has to me an extreme nostalgic effect. Pennebaker’s footage is incredible, both his footage of the performances and of the audience. Music pretty much never got better, and seeing this live performances really captures the love affair going on between the performer and the audience. The footage also enables one to travel through time to participate in the audience. It is so full of joy and feeling of liberty. Jefferson Airplane, The Who, Jimi Hendrix, Janis Joplin, The Animals, Otis Redding, Ravi Shankar, The Mamas and the Papas, Buffalo Springfield. I mean come on. Taken directly from a dream. Among the finest performers ever. Jefferson Airplane doing TODAY, The Who doing MY GENERATION and Pete fucking the instruments up, Jimi performing like a god to later make love to his guitar before burning it, Janis’s singing takes the word capturing to a new level, The Animals’s cover of PAINT IT BLACK, the montage to SAN FRANSISCO, Otis doing I’VE BEEN LOVING YOU TOO LONG, Mamas and Papas doing CALIFORNIA DREAMIN’ and Ravi Shankar’s breathtaking performance and the footage of Jimi, Michelle and Mama Cass in the audience. These moments are indescribable. So beautiful.