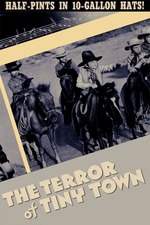 Classical Hollywood did an amazing job convincing the world that films were prestigious, glamorous, and upper crust, to such a degree that you can almost forget that it used to be a straight-up carny industry. When film was invented, shorts and spectacle films literally traveled with fairs and carnivals. Nickelodeons and Edison's peep shows would blanket a street corner with attract-advertising and an actual barker calling you in to separate you from your nickel. When the studios went "legit," the second and third and fourth tier producers who were left on the outside of the velvet rope stayed carny as hell, which nurtured the roots of the race films, exploitation films, sexual hygiene films, and, yeah, stag.

In that environment, the only thing that's surprising about The Terror of Tiny Town is that it took until 1938 for somebody to think of it. It's raw exploitation -- a paint by numbers western populated with little people as literal spectacle. Almost every shot is a gag. You're not meant to get swept up in the plot, you're meant to laugh and marvel at all of these actors trying to be big tough westerners. "Oh my god, they're almost like regular people" is the wild idea you're supposed to be laughing about. It's cynical and greedy and, thankfully, mostly forgotten.

(As an aside, Jed Buell did something similar the year before with Harlem on the Prairie, billed as the first singing cowboy movie with an all-Black cast. which has been reclaimed by some critics as a necessary piece of revisionist media that returns black bodies to the west after mass media erased them... but I think it's fair to say that wasn't Buell's goal. He just knew it would be a spectacle and a curiosity, which makes it more fetishism than revisionism to me, but I'm eager to have my mind changed.)

I've been building a class on the American exploitation film, and so I felt obligated to watch this, but there's no reason to seek it out if it doesn't sound like your thing. The production value is cheap and stock, the audio technology sounds five years out of date, and as I mentioned above the plot is so standard they could have bought it in a kit. It's just the ableist spectacle angle that gives the film anything to talk about at all.

I think it's probably a one star film, but I'm going to go half-star because fucking obviously.