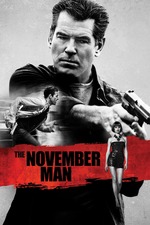 Roger Donaldson is one of those directors who has had an interesting career--he's done a wide range of genres and star vehicles, from Cocktail and Species to The Bank Job and Dante's Peak--some enjoyable, some flat and perfunctory. His work doesn't really have much in the way of personality, although that can be an asset when he gets out of the way of the story he's trying to tell--efficiency can be a major benefit in a thriller after all; and his past work with Brosnan suggests a certain comfort between star/producer and director in this film. So is it worthwhile? Well, sort of.

From the ad campaign I was expecting a more-or-less straightforward Taken/Transporter style wish fulfillment film with Brosnan as an unstoppable badarse causing havoc, and that sort of applies to the film---but it's also weirder and darker and more complex than it probably is credited with being, or maybe even should be. There are lots of interesting features in the film, but they're not always developed effectively.

For instance, there's the mandatory scene at the climax where the real villain reveals his reasons for doing what he has (a variation on the greater good, natch) which, given the current situation involving Russia and the Ukraine certainly is a timely issue, so of course I perked up a bit as it looked like the film was setting up a dilemma of sorts between Brosnan and his foe, their actions, and the consequences of their views. But no, Brosnan just barks some half-baked, Seagal-level mumbo-jumbo at the dude and knocks him down. There's also one of those mandatory action film bits in the scene as well, where the villain brings in the title of the movie and explains the nickname. Yes, it's as silly and random as it sounds.

Another feature that didn't feel developed, but was kind of provoking, was what felt like a real focus on how women were victimized by the international spy game and the notion of macho men with guns it supports. From the very opening scene, where a kid is shot accidentally during a Brosnan op, and the camera lingers on the mother's reaction, the writers seem to have gone out of their way to ensure there's a mix of traditional male spy archtypes, but also women in their lives. Most scenes feature at least one female supporting character (The girl across the hall, Olga Kurylenko's McGuffin Social Worker, a female russian assassin, a CIA mid-level manager, Brosnan's contact he's trying to extract, a 12-year old girl, etc) and most of these characters are rendered hapless at some point in the movie, having decisions made for them by jerks who end up getting people killed willy-nilly. It SEEMS that the director is saying all of this is unhealthy, to the point of keeping what seems like it could have been a romantic relationship between Brosnan and Kurylenko ambiguous, but the end of the film doesn't quite follow through on that reading--a little too conventionally Hollywood happy, and avoiding tying some of the threads together.

There's a scene for instance, where Kurylenko, at the end of the second act, goes to a hotel to kill a Russian who raped her years ago. She gets past his security, gets into his room disguised as a prostitute (as pictured on the poster) and gets a weapon..straddles, him, puts the blade to his throat, and he does the creepy 'talking his way out of it until he's dominating her on the bed' thing.....of course Brosnan bursts through the door in the nick of time, but still, the message there about a woman's agency is.....unfortunate. There is a scene later in the film where she takes out an assassin looking to kill her, but as that assassin's female, it doesn't quite wash the taste of the earlier scene out of the viewer's mouth

(Olga does her usual solid job with the character, though--she's a great actress and it would be nice to see her with more to work with more often)

Also, the young actor who plays Brosnan's rival/protege, Luke Bracey, reminded me of nobody so much as a young Sean Bean, especially in the second half of the film, when he's running around all banged up. It gives the film a nice, nostalgic callback-to-Goldeneye feel, even though it actually isn't.

And Brosnan does a good job with a character who's.....ambiguous enough to do at least one horrible thing midway through the film. Again, it feels as though the filmmakers are trying desperately to remind us that these are not very nice people.