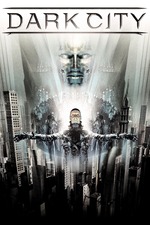 I can see why this failed where The Matrix succeeded. It’s a competent Hollywood spectacle; it’s got great production values and a bombastic score to tell the audience how impressed they should be with it all. But it’s too insular and self-congratulatory, too much Hollywood trading on past glories as it so often loves to do. In 1999, The Matrix was something shockingly new. The Matrix was such a simple and flexible conceit that it became something mythic, tapping really directly into people’s alienation and feelings of powerlessness. Dark City wants to tantalize with its mysteries, but it withholds the answers for so long that by the end I was too checked out to care. It’s too specific, too much talk about memory and the soul and not enough kung fu. Laurence Fishburne explains what the Matrix is in a couple minutes, and we’re in. It’s a threat that feels immediate because it could involve us. Maybe the world isn’t what it seems; maybe we’re all sleeping in pods. But we know that we’re not living in Alex Proyas’s head.

I guess the moral of Dark City is that it’s possible for people to escape the weight of their pasts and embrace a brighter future, which is a lovely sentiment, but it’s safely well-trodden Hollywood territory. There’s sort of an interesting Cabin in the Woods thing going on where the Strangers stand in for film critics, analyzing films to death in a futile attempt to understand something they don’t possess, or for Hollywood producers, recombining the same old tropes again and again because they don’t understand the creative spirit. So a director working out his frustrations with film; insular and self-congratulatory, Alex Proyas biting his own tail. I could spend more time trying to take him seriously, or I could take his advice and take a walk outside instead.