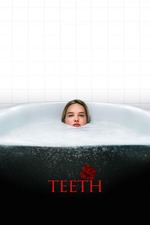 Goddamn it. I really hate when an awesome premise is totally butchered by some jackass who doesn't know how to make a film.

The idea of sexual discovery being something befitting the horror genre is nothing new. And the idea of female empowerment by means of penile dismemberment is equally well-trodden, but a vagina with teeth is a really creative way to combine these themes, so it's really disappointing Teeth is such a steaming pile of dog shit.

First, let's address the technical complaints: much of the acting is abysmal, though our lead isn't too bad. The lighting, framing, and editing is utterly atrocious, with very little information conveyed visually, very few aesthetically pleasing or thematically appropriate shots. The lighting would net a film school freshman a C+. And you really need help from your lighting when your prosthetics are laughably unconvincing.

If this film had chosen to be a silly, way over-the-top Hobo with a Shotgun-esque venture, well aware that its social commentary was secondary to its revels, that would have been great. Contrariwise, had it chosen to be a clever, play-it-straight horror film that inhabited that weird zone whereby an unbelievable premise is made believable by excellent filmmaking, that would also have been great.

Instead, Teeth is somewhere in between: way too on-the-nose and melodramatic to be taken seriously but unwilling to admit to itself how ludicrous its subject material is or how low-effort the script reads.

The problem lies in the film's missteps along its path of self-righteous social progressiveness. Literally every single male character in this film (except, weirdly, our protagonist's father) is a rapist. Is that really the way to go about probing an actual issue? Making everyone with a penis (including the gynecologist; way to encourage healthy sexual habits) cartoonishly violent and totally lacking in empathy?

There's a scene in which the classroom is discussing female anatomy and a golden sticker is placed over the vagina. A student understandably asks why penises are exposed but the vagina must remain hidden. That would be a pretty nice little bit of social commentary (albeit obvious) if it weren't for the fact that this film literally showcases a dozen penises (actual, sketched, prosthetic, you name it), but refuses to depict a vagina, despite the entire story literally revolving around one. Way to be a spineless hypocrite, Lichtenstein. You already had the "R" rating either way; what's your excuse?

Another example of this inadvertent backwardness is the repeated motif of the steam billowing out from the cooling towers of a nuclear power plant. The implication seems to be that this a perversion of nature - that we ought to be punished for invading on what was already here. But really dude? You're gonna go after nuclear for that? One of the cleanest power sources there is? And are you really sure you wanna tie in the inherent virtue of nature into this? Because I've got news for you: rape is as natural as it comes. Might wanna reassess that one.

If you wanna see a badass woman avenging her rape by removing penises, go watch I Spit on Your Grave. This film has no redemptive qualities, not even in a so-bad-it's-good vein.