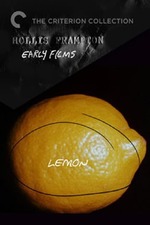 Alright, look. This one's a tricky one, so bear with me. Art is a SUPER confusing thing, okay? Not only is it confusing, but it's also subjective as hell. While one person can pour out all their creative energy into a self-portrait and have it be labelled crap, another person can draw some squiggly lines on a paper and have it be deemed a masterpiece. So art hits people differently. If you were somebody who watched "Lemon" and said it was pretentious and meaningless garbage, I absolutely couldn't blame you. It's a seven-minute-long shot of a goddamn fruit under different lighting, for Christ's sake. But during my time watching it, I was surprised to find that I... actually... enjoyed it...?

Look, hear me out. I don't want to sound like some pretentious art douche, but I found this single silent shot to be very mesmerizing. The way the light shines on the lemon really puts the spotlight on all of the fruit's spots, curves, craters, and imperfections. The way the bright, harsh, and vibrant yellow of the lemon clashes with the deep, expansive, black background creates a thin, warm, deep orange outline that horizons the fruit. It's all super interesting to look at.

The light then begins to move, slowly allowing the lemon to be devoured by the black dark. The absence of light. In your head, as you've been staring at this simple fruit for a few minutes already, you may start to see some other shapes as the lemon is swallowed by the dark. One second it may slightly resemble the shape of a crescent moon. The next, the colors and shape of the lemon may look kind of like a distant planet. It even almost looks like a shot from a film like "2001: A Space Odyssey."

I think it's amazing how much we humans take everything we see, from every shape, to every color, to every texture, to every curve, for granted. Once in a while it's nice to stop and appreciate the simple things in life, and to admire the intricate beauty that even something as simple or insignificant as a lemon might have. So yeah. Did I really write like three or four paragraphs about how a single shot of a fucking fruit seemingly changed the way I view art? Pretty much. But consider this: I've had a LOT less to say about so many other films that seem to have a lot more going on, on the surface.