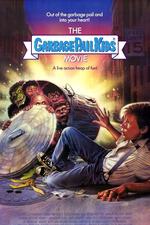 Movies like this, MAC and Me and Return to Oz are the ones that’ll give your kids nightmares, not horror movies. This one in particular is the scariest movie I’ve seen this year. Yes, this movie is scarier than Hereditary.

There are so many creepy moments, not to mention the nightmarish appearances of the GPK’s themselves. When the kids gets out of the bathtub, Valerie Vomit says “He’s got a cute little ass.” Ali Gator then says “And tasty toes too.” Because he wants to eat his toes because he’s ran alligator, yuck yuck.

About a third of the way into the film, after it’s been established what the film’s M.O. is being as immature and gross as possible, the monstrosities break out into a positive song about working together that could come straight from Barney the fucking dinosaur. It feels so out of place. And it’s the lone song in the entire movie (thankfully).

It’s amazing that something so wrong actually exists, and for that it’s defiantly worth seeing. I actually hated this movie when I was a kid (though I did like and collect the cards). I guess it should have been a cartoon, but I’m so glad it’s not. A GPK movie that is live action is such an ill-conceived idea for a movie. What the hell were they thinking? I can totally see why this has developed such a huge cult following.

The great Phil Fondacaro plays Greaser Greg, though you wouldn’t know it. The suits for the Garbage Pail Kids are awful and like I already said, the stuff of nightmares. I can get into this though. I enjoyed this a lot this go round. If the movie deserves half a star, add three and a half stars for being a completely unique experience. I need the song “You Can Be a Garbage Pail Kid.” Actually just give me the whole soundtrack.

Holy shit, I just read that original director was going to make this a straight up horror movie. Imagine that.