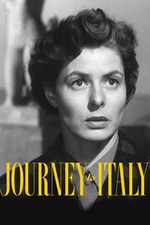 This one hit me where it hurts because it reminded me of two journeys to Italy years before my own marriage fell into ruins.

Northern Europeans, Ingrid Bergman and George Sanders, smolder in quiet resentment among fiery Mediterraneans. They’ve left the world of business in cold, eroding, and literally insular Britain and come to the relaxed world on a hot, unstable volcanic peninsula. Their marriage is in ruins as they wander among excavations of Pompeii, among the bones of an orderly ossuary and on the slopes of steamy bubbling Vesuvius.

Ultimately the couple gets caught up in an exotic and emotional festival on the streets of Napoli, which uncorks the frustration pent up inside them, and they decant their love for one another. This would seem a surprise melodramatic ending, but I suspect Rossellini -- ever the Neo-Realist -- knows that in reality this romantic recommitment will be temporary and will fade once they return North.

The film contains the best depiction on record of that most useless of emotion: Resentment. George Sanders delays going home while Bergman sits up listening expectantly for him, only to turn off the lights and pretend to be asleep when he comes in. Both are then disappointed that the other doesn’t say the exact thing they’d hoped for, so they each say something meant to harm.

Perhaps if I’d seen this during the early days of my own slowly dilapidating marriage, I might have recognized the guaranteed failure of this strategy and would not have pretended to be asleep on the sofa when my wife returned home then been resentful that she didn’t come and greet me with a Pinot-laced kiss, which I felt I was entitled to.

Had we seen this during the time when things were starting to crumble, perhaps we’d have recalled Italy as the setting of one of the happiest times of our lives: trekking up Vesuvius on a 100-degree day with a flock of nuns, walking thru Pompeii perhaps with the son of one of the guides in the film hearing about the vats where they “kept the piss for making of the ammonia with the piss,” seeing the plaster-cast voids of dead lovers, glugging unlabeled wine out of 4-oz tumblers, lying about on a terrace high above the sea looking across the azure to Capri, and even getting stuck one day in the streets of Naples behind a pack of celebrants processing a Madonna. Perhaps these memories would have stirred something inside the two of us and allowed a deep love to break thru the crust and pour out again.

I'm struck by the magic of cinema: Ingrid Bergman and George Sanders now gone, can return to life on film and warn the living about dying marriage, just like another real couple who died in 79 AD return from the ashes to warn the Joyces.

I Know Where I'm Going!