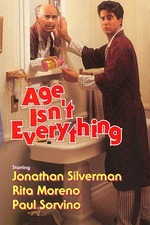 Jonathan Silverman, he of some of the worst films ever made, proves he is a good actor who has made some bad choices.

Here, he is Seymour, a young man who is obsessed with becoming an astronaut. His parents, Max (Paul Sorvino) and Rita (Rita Moreno), let Seymour move back home after college. He goes into business to make his parents happy, but still misses not following his dreams.

As Max and Rita grow impatient with Seymour around the house all the time, Seymour wakes up a few times one night with the urge to pee. In the morning, he limps into the kitchen, hacking and coughing and speaking like an old Jewish man. Suddenly, he has aged inside while his physical appearance does not change. Seymour's grandparents (Robert Prosky and Rita Karin) suddenly have more in common with their twenty-something grandson than they realized. These two bicker, waiting for death. Seymour goes to doctors and shrinks, who diagnose him with an aging disorder that has put his body at approximately eighty three years old.

Seymour blames God, and tries to get bar mitzvahed again. The rabbi refuses. He visits a clinic where they have the technology to record a patient's dreams and play them on a video recorder (I am not making this up). Just as he is about to receive help, the clinic is closed for tax delinquency. As Seymour careens toward death, he buys a cemetery plot. His friends do not know what to do with him, his parents resent him as their marriage falls apart, and he even manages to distance his grandparents. The climax does not satisfy an already impatient viewer.

Annoying. Jonathan Silverman is likable, handsome, and has screen charisma. The minute he turns into an old Jewish man, I wished the merciful angel of death would visit immediately. He toddles around, using more Hebrew words than a Jackie Mason concert, and I just hated him. Moreno and Sorvino are completely miscast as his parents. Prosky scores some nice scenes, and is almost unrecognizable as Grandpa Irving.

Douglas Katz directs his own script, but this is not a light and fluffy body switch comedy along the lines of "Big" or "18 Again!" Katz tries to turn this into an artsy think piece, and any humor he tries in the first half of the film is jettisoned in favor of morbid humor in the second half. For a comedy, I only laughed once- when Seymour pushes a wheelchair bound old woman down a hill. More wicked humor like this would have helped. Instead, there is a running gag about doctors inserting their fingers in his butt that never made me crack (ha!) a smile.

By the time the senseless ending rolled, I came to hate every character here. Watching this movie was a chore, and I am a lesser person for it. Skip this at all costs.

All the Vermeers in New York