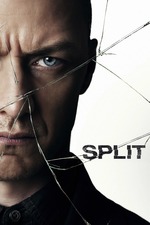 Probably the most interesting idea in this film is how the metal part of the human body can control the physical part. Of course, the brain can convince the body to do things that seem unnatural or illogical (just look at placebo effects), but this is quite extreme. There are stories of people lifting cars to save themself or loved ones, but that's rare and they can't sustain it. So I just think this film approached the capabilities of the human brain interestingly.

The story was really interesting, and I think if we don't get Dr. Fletcher's point of view, it isn't as good. She says that we look at people with mental disorders, such as DID (Dissociative identity disorder) as less, but what if they're more. She mentions how different personalities have different body and chemical reactions such as one personality being allergic to bee stings and another one isn't. The twist with the zoo actually surprised me and it made sense.

Now I just need to watch Unbreakable and Glass. Also sorry about reviewing this 3 days later.