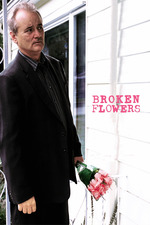 A film of quiet, droll simplicity, Jim Jarmusch's "Broken Flowers" looks at the complexity of perception. It observes how the people who we touch and who touch us can, to the outside world, define us; and how the things with which they fill their lives define them. Even girded with this knowledge, the outside world may never know the reality of that person or the person they have impacted. Our perception, however, has been born.

The story through which Jarmusch explore this idea follows Don Johnston, played with an easy magnetism by Bill Murray, as he works to track down a woman who claims to have birthed his child 19 years earlier. Setting about the task of finding the unknown woman, Johnston visits all of the women with which he had relationships two decades prior.

Less a mystery than a series of brief character studies, the narrative is nonetheless interesting. It is executed in long, slow cinematic passages, and Jarmusch builds a story with which his audience must have patience. Jarmusch is observant, holding on quiet shots and moments almost to the point of intolerance. For those with the necessary patience, Jarmusch's commitment to this speed of storytelling is a thing of beauty.

With Murray in tow, Jarmusch casts his film with an eye for faces and subtly communicated histories. Murray is curious, cautious, and quietly charismatic. The women with whom he reconnects, played by Sharon Stone, Frances Conroy, Jessica Lange, and Tilda Swinton, have brief screentime but enormously telling presences. Each different, all of these characters and their actors effortlessly tell the audience both about themselves and the people whose lives they have graced

With a beautifully overcast color palette, Jarmusch paints his film in natural colors. His film looks like real life; there is a dull vibrance flowing from each frame.

This is a lovely, methodical, and engrossing film. It is mundanely soulful and internally spirited; it is full of both the sounds and quiet of life. Meditative but naturally so, "Broken Flowers" tells a molasses-paced story whose sweetness is found its characters, performances, cinematography, and themes. We may never really know the answer to the film's mystery, but we are allowed to muse upon the reasons we think what we think and how we perceive what we perceive. That may be more satisfying than any real answer.

Where the Buffalo Roam