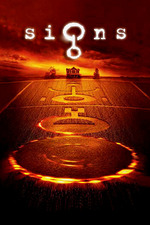 A science fiction thriller elevated by its protagonist's struggle to regain his faith, M. Night Shyamalan's "Signs" is an excellent piece of work. Both expansive and personal, the film is not content to be simply a genre exercise and takes its most impressive strengths from its thematic, character-driven, and tonal core. It is as exciting and chilling as it is human and layered.

Shyamalan's narrrative unfolds in the farmland of Pennsylvania where a former preacher must hold his family together as Earth is threatened by extraterrestrial invaders. Beneath the delicious B-movie premise is a restrained story of man who, after losing his wife, denies the faith which has provided him both a career and a sense of place. Looking for signs that may restore this sense of place, Mel Gibson's former man of God finds strength in the dutiful pursuit of protecting his son, daughter, and brother when humankind is threatened.

Shyamalan deftly mixes personal drama with end-of-the-world operatics. The film is never measured enough to qualify as a character study, but its observation of a protagonist dealing with crisis, both within himself and the outside world, is what sets the story apart. Indeed, there are deadly aliens and hovering spacecraft, but Shyamalan's masterstroke is to focus on a single imperiled family and a father who has lost his way.

Gibson is ideally cast, offering charm, heartbreak, and steadfastness. Moreover, his character provides the film with comic lilt. There is a natural and never out-of-place sense of humor that punctuates his interactions with other characters. Joaquin Phoenix, Rory Culkin, and Abigail Breslin play off the dynamic Gibson with strengths of their own, building a remarkable family unit. Shyamalan's small cast communicates an authentic, light touch in the face of fear and an unending commitment to one another. The cast is the key to the film's uplifting message and engaging tone.

Shyamalan directs with a Hitchcockian grace. Cameras skulk and stalk, looking to the sky or down corridors as if to foreshadow the idea that something will be out there. He combines misdirection with clarity, darkness and light, creating an uneasy yet genuine tension and directing the viewer away from the obvious. His compositions are bold and symbolic, and he moves from moments that terrify to moments of levity with ease. Punctuated by James Netwon Howard's score, Shyamalan's cinematic storytelling is broad, textured, and personal. It reflects his influences and forges its own path.

Thrilling, frightening, harrowing, and moving, "Signs" offers a remarkable experience. It is science fiction where genre trappings are much less important than human heart beating at its core. Though those trappings provide sharp bursts of excitement, it is that human heart, in its funny, broken, and redemptive glory, that makes the film outstanding.