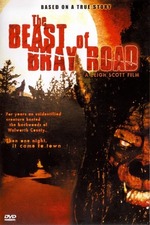 The Beast of Bray Road

A horror cheapie from The Asylum (the distributors behind dozens of other contemporary horror cheapies), "The Beast of Bray Road" is not as bad as it could be; but that it not saying very much. A werewolf tale that follows the rampaging of a legendary, local beast, the film supplies lots of gore but little story or effectiveness.

The action of the film is set against a stereotypical, backwoods American community where the locals find themselves picked off, one by one, by the titular creature. Enter a young Sheriff and biologist to save the day. The story is all set-up and little pay-off, but it is buoyed by a small sense of humor and some unhingedly gory moments.

The production offers what might be expected from a film with such limited resources, but, aside from ridiculously poor sound editing and a off-the-rack, Halloween costume-resembling werewolf, things are not too distracting. Still, the film is seasoned with enough eye-rolling moments that it will most likely take some patience to get through the entire, below average affair.

Forest of the Damned