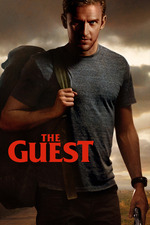 A superb exercise in slowly ratcheting dread and tension, Adam Wingard's "The Guest" is twisty, appealing thriller. Its third act constructed like a horror film, Wingard blends genre conventions for something that is gripping, surprising, and memorable. It is an engaging and well-assembled drama that provides ample chills and visceral moments.

A classic stranger-who-is-not-what-he-seems narrative, the story follows an ex-soldier who takes up with the family of a fallen comrade. As the family begins to learn the truth about the lodger, situations turn violent. The plot is mostly straight-forward, but mysterious notes keep things interesting.

The narrative compels, but Wingard's focus is on the film's tone and ever-increasing tension. Sound design, set-ups, and performances weave together to produce a experience with heady shocks and muscular thrills. The production is rock-solid, and its small-town New Mexico locations create a sense of isolation that serves the film well. Wingard's cast is ideal, communicating the lack of ease and abundant fear necessary for the drama.

"The Guest" is a small-scale thriller that is thoroughly effective. Wingard again exhibits strong directorial chops, creating a piece of work the is effortlessly riveting and icily satisfying. It is a devilish drama with a solidly executed collection of dark thrills.