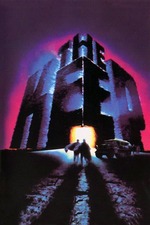 Simultaneously overwrought and underdone, Michael Mann's much-interfered-with "The Keep" is a horror film of unique strangeness. With its over-the-top sensibilities (Nazis! Demons!), its gauzy artfulness (mist... hot pink... Tangerine Dream...), and its lack of satisfyingly developed story (interesting parts without connective tissue), the film languishes as a compelling oddity whose watchability is strictly in the eye of the beholder.

"The Keep" follows a group of Nazis charged with occupying a keep and village in Romania. Unbeknownst to the soldiers, the keep contains a demonic force who is unwittingly released by the treasure hunting Germans. From there, the plot reveals a stew of half-interesting characters, motivations, and events which unfold and interact as if the audience is to supply its own connective information. Cut down within an inch of its life, the film is missing too much to make a compelling narrative.

What is narratively suggested is interesting, however, and those suggestions, coupled with Mann's style, make for something oddly almost-appealing. Mann focuses on the misty and the boldly colorful, giving the film a straight-from-the-'80s, music video aesthetic. The score by Tangerine Dream, an always-hollering Ian McKellan, and a creature that looks molded from shiny plastic add to the strangely magnetic weirdness.

There is definitely something about "The Keep." Bizarrely engrossing yet narratively repellant, the film is a solid, cohesive story away from being anything more than a wash of an experience. Still, the weirdness might just make it worth watching.