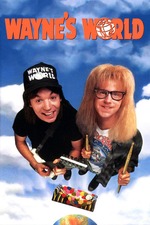 Penelope Spheeris's "Wayne's World" takes Mike Myers' revered SNL characters and blows them up into a feature-length production. The problem is that the same schtick that works well in ten-minute sketches wears thin when stretched to over 90 minutes. Still, "Wayne's World" supplies enough good-natured fun to rate as a solid piece of work.

Focusing on the two stars of Aurora, Illinois' favorite cable public access program, "Wayne's World" sees the show hit the big time in Chicago, forcing the program's Wayne and Garth to decide to sell out or not sell out. Throw in a bass-playing hottie, Rob Lowe as a smarmy TV producer, and Alice Cooper, and the formulaic yet engaging plot of the film comes to life.

The film expands the scope and scale of its namesake Saturday Night Live sketch but rarely expands the comedy. The jokes seem to be lifted directly from SNL, and the film misses to opportunity to build the film into something different than its source material. Seeing Myers' Wayne and Dana Carvey's Garth on the big screen is a kick, but the material runs out of steam quickly. Leaving behind an energy-inducing fourth wall-breaking gimmick early on actually saps some of the film's knowing, irreverent, rock and roll spirit.

Fun but never raucously funny, "Wayne's World," nonetheless, supplies an above average experience. A solid cast and solid production serve as a sturdy foundation for an imperfect expansion of a classic comedy sketch.