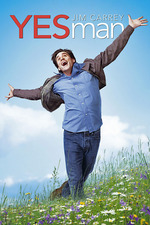 If Peyton Reed's "Yes Man" is not the best feel-good, high-concept rom-com of the last decade, then nothing is. Coasting on an effervescent energy equal parts charm and personality, the comedy rides a narratively stylized premise and the charisma of its cast to result in something warm, witty, and often hilarious. It is a complete delight.

Starring Jim Carrey as Carl Allen and Zooey Deschanel as Renee Allison, "Yes Man" revolves around Allen as he embarks on a personal attitude change wherein the former naysayer decides to agree to anything put before him. Drawing him out of a career and personal rut, saying yes puts Allen on a path to positive change and life-altering affirmation.

The concept, man says yes to everything after saying no to anything, gives the narrative a unique twist and allows its recognizable romantic comedy beats to breathe fresh cinematic air. It is a film about finding a positive previously anchored in the melancholy and bite of closed-off humanity, moving its players from a crusty cynicism to a buoyant liveliness where romance and generosity thrive as elements of empowerment.

Of course, there are also Carrey and Deschanel whose pairing deserves a place in the romantic comedy canon. Carrey is his typical self, but his Carl Allen is layered and ticks with an internal loneliness and external silliness. As a his feminine foil, Deschanel joyfully portrays Renee Allison as a burst of blue-eyed sunshine tempered with an understanding of life's rumpled corners. The two are excellent together and produce an energy as amusing as it is heartfelt.

Reed focuses on that energy in a straightforward production that combines the upbeat with a slight, knowing edge. There is an airy brightness to the visual signature that offers sturdy-enough cinematic scope and avoids falling into sitcom set-ups. The film moves at spry pace, and Reed imbues everything with an inviting pop.

It may all seem very lightweight, but "Yes Man" is a gleefully appealing and fully felt comedy with designs only on making an audience revel in its entertaining, infectious, and human spirit. Satisfyingly clever and instantly endearing, the film bounces with a winning cast, a rich concept, and the uptempo sense of the positive at its core.