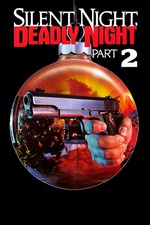 It's pretty damn ballsy to use literally FORTY MINUTES of flashback footage from the first movie to set up your dumb sequel. Still, it's kind of a neat-o way to experience the original since it just filters out everything but the kills and the boobs.

Once the actual movie finally gets off the ground, however, all attention turns toward our remarkable leading man. I'm not sure how the fuck he was cast in this. His only previous credit was an episode of Divorce Court. Seems like he may have gotten this gig through a charity auction or a breakfast cereal contest or a Groupon? He conveys his psychopathy in a way that only a person with no legitimate acting experience could - through the prolific use of comically arched eyebrows and hollow maniacal laughter. He debases acting as a profession so thoroughly that cinema may never recover, at least not in my lifetime. I mean, he performs a hover hand in a sex scene - who would have ever imagined a universe where this could happen?

The gaffer for this movie is named Ro Mance. I'd like to believe it's the first and only instance of a gaffer disowning a movie through the use of a pseudonym. Alternately, I like to believe his parents gave him the name as a fucked-up joke and that he died a virgin. Never even got to hover hand.