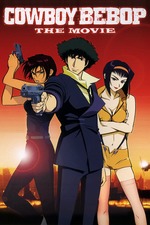 The future is now in Cowboy Bebop.

It's a future where the most practical invention is self cooking cup ramen, and a future where lousy convenience stores are still a vital commodity. Humanity has lifted up it's roots, but the new cities they create feel like an even dingier hodge-podge of blended cultures and belief systems than the ones they left on Earth. Interplanetary terraforming doesn't invalidate the necessity of street vendors and hot dog stands, because practicality supersedes innovation at every turn.

Any story told in this world will inevitably lack the naiveté of idealistic optimism, because thinking that way already failed whole mankind generations ago. They invented space travel only to have their orbits clogged with advertisements, they settled new planets so they could fight new wars, and they started new nations while taking old grudges with them. Therefore, any Cowboy Bebop story can only ask one question:

Where do the people fit in to a future gone this far down the toilet?

What Shinichiro Watanabe poses is a surprisingly uplifting and endlessly endearing answer to such a rotten question. The crew of the Bebop may be a bunch of broke losers, but they're at least broke together. Mars may be the most logical extension of a society where the population outpaces the services that support them, but they're all making the best of a bad situation. The humans of this world still celebrate Halloween, fly antique planes, jam out on the streets, and take things one day at a time. Everybody is connected if only by the loosest of a thread, because Humankind can only exist as the sum of it's parts.

Cowboy Bebop is an ode to humankind, and to all the vices and joys and sorrow that we are capable of creating. This is why a story with such an eclectic mix of inspirations and influences can feel so cohesive; it's nothing less than a reflection on everything we've accomplished so far. Telling a story where a spaceship dogfight set to big band music and a police raid set to haunting opera can only feel natural when this kind of approach is taken, and the movie is the most logical extension of this storytelling ideology.

The entire world of Mars is just as much of a character as Spike, Jet, Faye, Ed, Ein, or anyone who crosses their paths. Rarely does any filmmaker grant so much personality and significance to random passerby, and even more so for animation. Here, however, losing even one of the brilliantly rendered strangers we see on the street could very well sink the whole movie; every single frame is made with such craftsmanship and personality that the net whole is nothing less than a love letter to human existence at large. The random schlubs, schmucks, and joe schmoes we pass by every day could very well lead just as interesting a life as Spike does, and by taking such care to create such a lived-in feel, the movie becomes something truly special.

Mankind might've flushed their future down the toilet in this world, but it doesn't really matter. They're still in it together whether they know it or not, and it's more than a little bit wonderful to realize we are too.