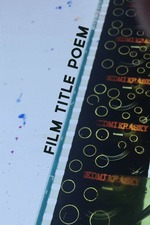 ***EDIT: I revisited this and have a pretty different outlook on the movie now, sorry Jennifer West! Be sure to read her intro to the movie before watching, it vastly improves the experience.***

Goodness, this must be how normal people feel like when I talk about Letterboxd!

Joking aside, this film plays with a concept I'm a really big fan of, but doesn't fully pay off with it. I'm of the firm belief that as time goes on, mainstream art is going to further "self-cannibalize" itself; as far as movies are concerned, this is likely to run deeper than the nostalgia grabs, remakes and the generally self-reverential feel we're currently subjected to in major releases. What I'm envisioning is more in line with the Ready Player One/Ralph Breaks the Internet kind of narrative, where stories will soon be commonly crafted around the preconceived notions of established intellectual property, the end goal less to tell an actual story and more to subvert or uphold the norms a given property may hold. This trend is already creeping into the mainstream as time goes on (see Final Fantasy VII Remake or the Disney Star Wars films for other more insular applications of the idea), but by and large interesting art hasn't yet come out of this trend within the mainstream. It's more common in art unburdened by financial demands, however; a painting of a certain soup can says more with one image than I could with 10 pages.

This digression was in the back of my mind the whole time I was watching Jennifer West's film. Film Title Poem is essentially cannibalized art, repurposing film title cards in a lengthy montage. However, the film doesn't do much beyond providing an interesting premise, as the movie is a letdown in it's execution and it's methodology. The lo-fi production style should work well with the avant-garde ambitions here, but it's a little too shoddy to stick the landing; seeing the Youtube UI on some of the title cards is an odd inclusion at best, and no amount of mental gymnastics can excuse the feature length runtime dedicated to a concept that never evolves its first 10 seconds. Having snippets of five (immensely grating) songs play on a continuous loop while interspersed with awkward bouts of silence certainly doesn't help either, and the whole thing feels shockingly slapdash and amateurish, despite the clear effort West dedicated to the animation/post-production of the film.

The worst thing about this is simply that it never actually presents a thesis to parse from the premise. West chose to run the title cards in (mostly) alphabetical order instead of organizing them with a broader thematic/conceptual sequence to make the piece have a more deliberate point, and the result is stunningly monotonous. The music, visuals, animation, and editing never seemed to actually work in tandem to develop concepts from any unique sequence of the cards, leaving only a vapid dirge of copyright declarations in its place. There's some really cool work done here, and a more specific take on the concept could do well to present a "tapestry of film" type idea instead of an alphabetized list of movies with scribbles. As it is, it didn't just quash my admittedly specific hopes for this kind of film, but rather failed to present any compelling strand of logic in its wake.

For now, I'm just gonna have to be content with the excellent cannibal art that the Fatal Farm/Lasagna Cat guys have to offer as the gold standard, and keep an eye out for a similar film to scratch the itch I'm looking for in the future.