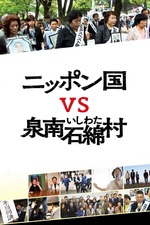 I will remember this movie for Yoko Okada.

Towards the midpoint of the film, she brings out all the medication she needs to stave off the effects of her asbestosis. Drugs to stave off the pain, drugs to manage her blood pressure, drugs to help manage the coughing, the endless, brutal, violent coughing. Asbestos is killing her, slowly and surely - over the course of the 8 years worth of footage Hara captures for this film, we see her become more and more slight, less and less vital, her spirit the only thing that anchors a body that seems to become more and more of a shell of itself.

Asbestos took her life away from her. Slowly, painfully, with excruciating discomfort and all-consuming destruction, asbestos is killing her.

Okada didn't do anything to deserve this. She was exposed to asbestos not by working in a factory or by working in a mine - she was exposed when she was brought to her parent's workplace as a child. For this, because her parents were unaware of the dangers of the material, and because the government knowingly lied about it's effects for decades, her life was taken away from her, slowly and surely. She lost the ability to work, the ability to freely live, to provide for her children and to have a life of her own.

She only gets older and frailer day after day, pill after pill.

Countless more carry asbestos fibers in their lungs, choking them from the inside out and tearing them to shreds each and every day.

Sennan Asbestos Disaster is a documentary whose scope is as sprawling as its focus is incisive. From the very beginning, Kazuo Hara makes it clear that the government is at fault, and that this is a film that is first a foremost about giving a voice and a platform to people whose struggle feels so fruitless when fighting against a government that will drag its heels at each and every possibility to avoid admitting fault however possible. These trials run for nearly a decade, as a seemingly endless series of officials punt off responsibility and avoid doing the right thing at all costs - even something as minor as a simple, human apology is impossible when speaking to people who have traded skin for red tape.

Kazuo Hara captures this all with flinching, straightforward, borderline uncinematic detail. He is the perpetual witness, a camera always in tow, somehow perfectly situated to capture the most important moment of any situation with impartial presentation and utterly pointed intent. At nearly four hours long (even with the intermission/bisected structure) this is a massive undertaking to watch, but one that is absolutely worth every last second witnessing it - this is a fight that deserves to be witness, and the victims deserve to be remembered and celebrated.

The film is unflinching. You will see people on their deathbeds, grow attached to plaintiffs that will pass unexpectedly, suddenly, painfully. Their lives, their spirits, their souls, snuffed out in undue time because the government failed to do their due diligence where it mattered most, their final days on the plant embroiled in a legal dilemma because the government can't do so much as make a simple fucking apology.

The film made me angry for the gross inequity it exposed, for the inhumane position that the government took time and time again, for how little human suffering and human life mattered until they wasted a decade's worth of time spinning their wheels into oblivion. This film crushed me as these people, these innocent, good, regular people had their lives destroyed, the flames of their spirits snuffed out one after another. There are moments of joy, moments of raw emotional honesty, of human connection and suffering that is so rare to witness and so vital to capture in a case and system that thrives on being as dehumanizing as possible.

This isn't a David vs. Goliath situation, a battle to the bitter end for the underdog to come out on top with verve and vigor - the Sennan Asbestos Victims just want to know that their lives have value.

A justice system that takes a decade to muster up an apology isn't just. Lives are worth more than that, and all the Yoko Okadas of the world deserve so much more than the nightmare they endured here.