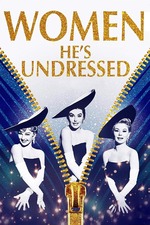 A sparkling gem of a Hollywood documentary I found on Netflix thanks to someone's recommendation on here. I really had no idea who Orry-Kelly was, but while watching this film I of course was familiar with his work with Bette Davis and on Casablanca, Auntie Mame, and my favorite, Some Like it Hot as well as others.

I love that it combines narrative with documentary. They have an actor reciting from Orry-Kelly's memoir of the many thoughts he has and the interactions he had with his mother via letters. Honestly I loved seeing the current costumers absolutely geeking out over the legacy that Orry-Kelly had created through his designs, while also citing the ups and downs he received during his career.

Also since this was distributed through Wolfe, we never lose the fact that Orry-Kelly was unapologetically queer. Then it also touched on people like Cary Grant who was more likely queer as well, but that subject is so touchy because of old people for whatever reason.

Lastly, this is a great doc because you get to listen to Jane Fonda talk about how she wants to motorboat Marilyn Monroe in her dress in Some Like it Hot.

Fox and His Friends

A Jihad for Love