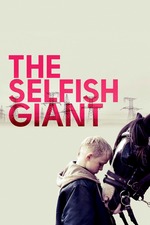 A sublime exercise in Loachian, social realism cinema, anchored by the sort of central performances from its newcomers, Conner Chapman and Shaun Thomas, that would have you believe they've been acting longer than they've been breathing, both capturing the realism perfectly to the point that they reminded me of certain people I went to school with, The Selfish Giant tells the story of a couple of youngsters being manipulated into collecting scrap metal.

Sound dire? That's because it is. This is a stark exploration of austerity Britain in a society, and a world, in which even kids aren't allowed to be kids anymore, constantly wondering where the next few quid will come from, even going as far as parenting their parents. It makes you think back to pre-Great Depression days of children being forced into workhouses by the selfish giants of the world.

But don't let the suggestions of 'Broken Britain' or potential poor people bashing put you off - this is neither demonising or preachy liberalism. It merely shows things as they are for a forgotten few (which is unfortunately increasingly becoming the many). However, beauty can still be found in this downtrodden tale, be it the stunning visuals that even manage to find the humanity in the most off-putting areas of Yorkshire, or the central relationship between the two boys that celebrates the importance of friendship when there's little else for you in the world.